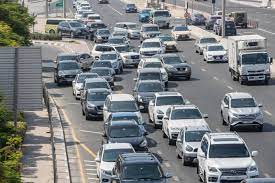 Some schools in Dubai are in talks with the city’s transport authority to reduce traffic around campuses during peak drop-off and pick-up hours.

Parents said congestion around key school zones in Dubai had become “unbearable and frustrating” since the majority of pupils returned to in-person classes last week.

Motorists travelling through areas with several schools in one place, including Hessa Street, Al Barsha South, Dubailand and Mirdif, said their journey times had nearly doubled since the new term started.

Many suggested that staggered start times, the addition of dedicated school slip roads and more parking zones around schools would help to ease peak hour traffic.

“Many parents were waiting over 45 minutes to drop their children at the front entrance, which resulted in a back-up of traffic onto the main highway”
Rob Commons, Uptown School in Mirdif

Others blamed the problem on bad road etiquette, with many drivers cutting queues and failing to follow school drop-off systems.

Lisa Johnson, principal at American Academy for Girls in Mirdif, said “traffic is a continuing challenge”.

“Prior to school we set up a task force to review the issue and changed our hours to dismiss earlier than the schools surrounding us,” she said.

“We have redesigned our car park to streamline drop-off and this has helped ease traffic.

“I am in contact with the Roads and Transport Authority in the hopes that another through-street can be organised to reduce congestion for several schools in the area.”

Within the coming weeks, she said many schools will resume after-school activities, which should alleviate some of the traffic at the end of the day. The school currently has 500 pupils on campus.

Rob Commons, principal of Uptown School in Mirdif, said part of the solution is in guiding parents to use the systems in place correctly.

“Often, one car parked in the wrong place can cause a huge backlog of traffic,” he said.

“Staggered times were considered as an option, but we chose to focus our efforts on how we can better manage the traffic flow on campus.

“On the first day of the year, many parents were waiting over 45 minutes to drop their children at the front entrance, which resulted in a back-up of traffic onto the main highway. This was a similar issue for the first three days.

“On the fourth day, we redesigned our drop off system and created two through-lanes for those dropping at primary and two drop-off lanes for secondary.”

While parents are still getting used to the system, he said the impact has been significant, with drop off times now “well below three minutes”.

Ben Blackwood, bursar at Dubai College on Hessa Street, said traffic is always a bane during the first week of the term.

“It was the first day of a new academic year and so in our case we had nearly 200 new pupils [in addition to existing pupils], so cars were picking up for the first time and were not fully aware of our drop-off and pick-up systems,” he said.

“Consequently, things were slicker on Thursday than they had been on Sunday.”

With school buses now permitted to run at 100 per cent capacity, Mr Blackwood said parents may consider school transport as an option for next term.

“Last year, buses were only permitted to be 50 per cent full, which meant that more children had to come by car,” he said.

“We are now permitted to use all bus seats, but some children and parents have got used to their cars.

“We have seen an increase in bus use this week and I hope that trend will continue.”

Mother of two Carlene Thurston, 40, drives from the desert suburb of Arabian Ranches to Dubai College in Knowledge Village to drop her children off at school.

This term, she said traffic has been considerably worse, mainly due to the addition of more housing and schools in Al Barsha and Dubailand.

“It should be a 20 minute journey but on Sunday it took one hour to get there and 45 minutes back,” she said.

“When we first moved here 12 years ago, there was nothing further out than us – now there is Town Square, Mira, Layan and Mudon.

She said the addition of an extra road lane on Hessa Street could alleviate some of the congestion or “perhaps the RTA could offer a free bus service around Arabian Ranches” to limit the hundreds of cars that drop off at schools in the area.

David Bullock, 43, said getting in and out to his son’s school in Mirdif was difficult.

“It has become really bad as it was taking me just 20 minutes to get there and back last year, but that journey has now doubled due to drive-through drop offs and the addition of four of five schools in the same area.”

Mr Bullock suggested one-way systems during peak times could be a way of easing traffic flow.

“If that is not possible, outer school car parking spaces should be cordoned and turned into filter lanes for parents doing drop-offs and pick-ups.”

How to do it right – driving to and from school

Coding and AI jobs: How do we get more girls into tech?