Coding and AI jobs: How do we get more girls into tech? 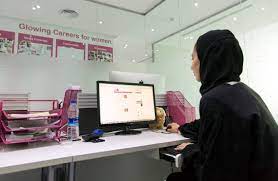 Female tech pioneers from the UAE have described their desire to get more girls to learn about artificial intelligence and coding.

They spoke in an online meeting of thought leaders, organised by the British Embassy UAE on Tuesday.

Gamification and using the power of social media were two suggestions on how to encourage more young people to consider a career in tech.

“A lot of people think that working in technology is not for them, because it’s too hard, or because there are stereotypes that only white men work in the sector”
Joysy John, 01Founders

Emirati student, Fatima Ali Aldhuhoori, who was part of her school’s prize-winning robotics team and Radhika Iyer, who studied in the UAE before moving to the UK and winning the Amazon Longitude Explorer Prize for tech design, discussed how much they enjoyed using computer science to solve problems.

Globally, these two women are outliers for their generation. Only 18 per cent of girls in tertiary education are pursuing science, technology, engineering, and mathematics studies, compared to 35 per cent of boys, according to the UN children’s fund.

Joysy John, the CEO of 01Founders, a free coding school in the UK, told the online meeting about the dire shortage of software engineers and the need for more young people to learn how to work in the digital space.

“A lot of people think that working in technology is not for them, because it’s too hard or because there are stereotypes that only white men work in the sector,” said Ms John.

“By changing this stereotype and by having more role models, we can actually change the world in terms of who gets to build the algorithms that are used by everyone.”

The UK has placed girls education at the heart of its current presidency of the G7.

In July, the country hosted the Global Education Summit in London and raised $4 billion for global education.

The UAE was the biggest donor from the region at that event, and will host the RewirEd education conference at Expo 2020 Dubai later this year, where international stakeholders will discuss how to redefine education to prepare children for a post-Covid-19 world.

Speaking on the panel, Hanan Ahli, acting director general for the Federal Competitiveness and Statistics Authority in the UAE, said the digital gender gap needed to be closed.

“Collectively, we can make together a bigger impact into girls education in AI. We can all empower more young women to enter STEM fields of study and careers,” she said.

“The UAE government is proactively addressing this through national strategies such as the UAE Centennial 2071, the Advanced Sciences Agenda 2031 and the UAE’s Fourth Industrial Revolution strategy.

“The literacy rate of women in the UAE stands at 95.8 per cent, with a remarkable 56 per cent of the UAE’s graduates in STEM courses at government universities are women.”

The panellists discussed in detail how to persuade girls that coding, tech and artificial intelligence are not just the domain of white men, despite that currently being the case.

A 2020 study by the AnitaB.org Institute, which aims to advance women in technology, found that women make up only 28.8 per cent of the tech workforce, with Asian women making up just 5 per cent of that number, and Black and Hispanic women accounting for 3 per cent and 1 per cent respectively.

Salwa Abdulla, director of the projects and programmes department at the Federal Authority for Government Human Resources, said self-empowerment was key to attracting young people into tech.

“It’s not about our academic subjects that we study in schools – self-learning is also an important aspect that we need to encourage,” said Ms Abdulla, who has worked in tech for 18 years.

“There are a lot of open resources on the internet where we can go and just explore, learn more about AI.”

In 2018, the UAE launched Madrasa, a free e-learning platform providing 5,000 videos to foster science and maths skills among Arabic-speaking students across the world.

“The platform has gained traction of over 6.5 million visitors, with 61 per cent of them being female,” said Ms Ahli.

Ms John said gamification was one tool used at 01Founders to attract young men and women to code, as this helped them indirectly to build the creative and technical skills needed for a career in artificial intelligence.

Ms Abdulla agreed, and suggested teaming up with influencers in the UAE and UK.

“Social media is a great tool. Ladies are influenced by fashionistas. So we need to sponsor an AI engineer who becomes an influencer within social media,” she said.

Dh5,000 fine and jail for parents who keep children out of school