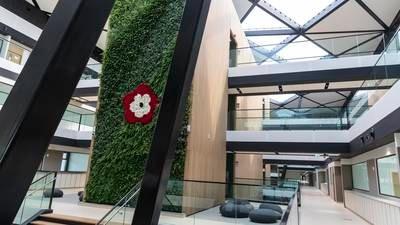 One of Dubai’s newest schools launched on Tuesday with a promise to provide a progressive education in an eco-friendly environment.

The Royal Grammar School Guildford Dubai is on course to be the first near-energy-neutral school in the Middle East thanks to solar panels in the car park and on the roof, and special pillow-shaped pockets in the plastic ceiling, which allow light into the building, but absorb heat.

“RGS Guildford is known for developing the character of its pupils, and teaching them the values of respect, integrity and collaboration”
Craig Lamshed, RGS Guildford Dubai

Each storey expands outwards, creating a shaded area underneath to keep classrooms cool, and living walls and palm trees grow in the central atrium to encourage air circulation.

The building won Energy Project of the Year award at the latest Big Project Middle East Awards for its energy efficient design, and is the first school to be assessed by BREEAM – an international scheme that provides independent certification of sustainability performance.

The campus, an outpost of the academically high-achieving British school of the same name, opened its doors to 250 pupils on Sunday, but has the capacity to host 2,100 children under one roof.

The founding principal, Craig Lamshed, from Australia, said they were in no hurry to expand.

“It’s about maintaining the teaching quality, and slowly growing the school year on year,” he said.

“There was a change in the Covid-19 protocols which meant we could expand our class size, but we are in no rush to do that.”

The school offers the British curriculum, and has a 500-plus seat auditorium, a double-storey library, a full-size football pitch and a 25-metre swimming pool – but the quality of those facilities is reflected in its fees.

Even with a 20 per cent founders’ discount, the school costs Dh60,000 per year in FS1, rising to Dh77,600 in Year 6 – the oldest age group currently available, although children up to 18 will one day be taught at the school.

The school has also offered to provide free uniform for the first year, and two extracurricular activities, which would normally cost extra.

“Quality education comes at a cost. If you look at the teachers we’ve attracted, if you look at the curriculum, the true partnership with RGS in Guilford and the amazing facilities – if you put all that together it does come at a cost,” he said.

“RGS Guildford is one of the top academic schools in the UK with over 300 children having attended Oxford and Cambridge in the last 10 years. But more importantly, it’s known for developing the character of its pupils, and teaching them the values of respect, integrity and collaboration.”

The school already has two international branches, in China and Qatar, and the teachers are keen to emphasise its 500-year history of teaching experience, and the brand’s focus on character development as well as academia.

The head of the junior school, Clare Turnbull, who worked on the original UK campus for 16 years, said they are not taking a franchise, cookie-cutter approach to education.

“Everything that we hold dear is what we’re bringing here. I am here in Dubai because of RGS, and three of my colleagues have come out with me. We will stay true to the values and the ethos of the original school.”

Sophie Robson, a mother of two, said she chose to send her 10-year old daughter to RGS Guildford Dubai because she was impressed by the teachers, like Mrs Turnbull, from the British branch of the school.

“They focus on each child as an individual and look for their passion by exposing them to lots of different extra-curricular subjects,” she said.

“My daughter is learning Mandarin this year instead of French, and the children are encouraged to develop a sense of responsibility not only for themselves, but also for those around them.

“Plus the eco-friendly building is a nice environment for the kids to learn in.”